The 2016 presidential contest was historic along a number of dimensions, including the first woman general election candidate and the first general election candidate in history with no political or military experience. The 2016 election season was also distinct in the salience of identity-based discussion, with immigration status, religious affiliation, race and gender all figuring prominently into the candidates’ messages. Furthermore, highly divisive rhetoric and uncivil attacks plagued a contest between two candidates who were disliked by large segments of the electorate. Thus, this unusual election season allows for a unique opportunity to study the impact of candidate messaging during a historic, yet highly polarizing presidential race. We propose that emotion played an important part in shaping reactions to candidate messaging in 2016 and we explore the role of emotion employing a unique study of the presidential debates.

Research tells us that emotion influences how people process messages (Brader, 2005; Isen, 1987; Lodge and Taber, 2013; Marcus, 2000). Yet, given the identity-centered messaging present during the campaign, it is likely that voters reacted differently to candidate’s messages, based on their identity. In particular, we might expect certain racial, gender and ethnic groups to be more upset or enthusiastic in response to particular messaging. For example, female viewers might have more hostile reactions to Trumps’ attack on Clinton as a “nasty woman” in the third debate or racial and ethnic minorities might be more upset by discussion of the stop and frisk policy in the first debate. Given the unusually divisive nature of the presidential debates in 2016, existing research concerning candidate messaging, identity and emotion does not provide a clear guide for understanding responses to Donald Trump and Hillary Clinton or their messages.

Leveraging data from both the data generated during the debates by the facial expression software and respondents’ pre/post-test questionnaires, we examine how different groups (e.g., men, women, Whites, Latinos, African Americans,) responded to candidates’ messaging during the debate. We conclude by discussing the implications of our findings. 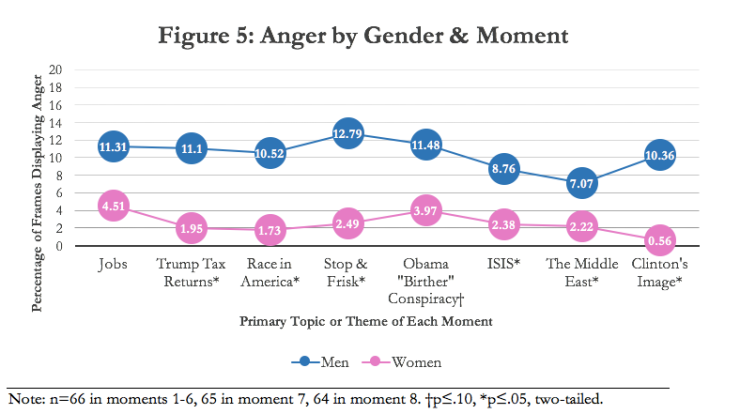