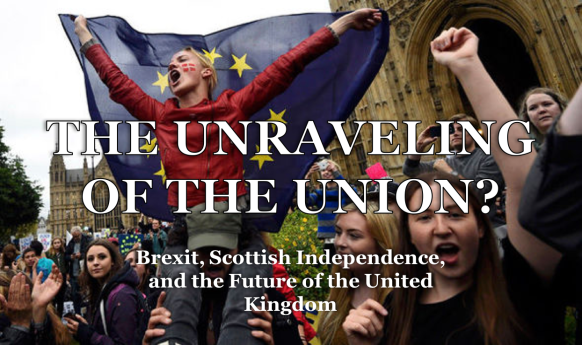 Prepared for the Annual Meeting of the Georgia Political Science Association, Savannah, GA 2016.

On June 23, 2016, the referendum to exit the European Union was approved by a thin majority (52 percent) of voters in the United Kingdom. While Brexit raises troubling questions about the future of the European Union, the more immediate question concerns the future of the United Kingdom. A majority of voters across each of the councils in Scotland voted earlier this year to remain in the European Union. When Scotland voted on independence in 2014, with 55 percent of the electorate voting “No,” one of the key arguments made to voters for staying within the UK was to retain membership in the European Union (“Fragmentation Nation” 2016, 50). In addition to the political turmoil in London and the trauma to global financial markets, the fallout from Brexit might well entail another Scottish vote for independence. Scotland’s first minister, Nicola Sturgeon, is already engaging in a delicate dance with Brussels on “how the EU membership of an independent Scotland might be ensured” (“Article 50” 2016, 20).

Our study begins with an overview of the drive for independence in Scotland and the 2014 vote. We then explore the troubled marriage between Britain and the European Union with a focus on the Brexit campaign and the referendum results. Our data analysis employs a multivariate regression to investigate the demographic, socio-economic, and political predictors of the Scottish independence and Brexit votes across the 32 councils of Scotland. We also investigate the relationship between the 2014 independence vote and the 2016 Brexit vote across the 32 councils of Scotland. This study concludes with a discussion of the uncertain future of Brexit and the United Kingdom as well as prognosticates what a second vote for Scottish independence might look like based upon the multivariate analysis in this study.

Table 1 shows the results from two models: the Scottish independence vote and the Brexit vote. Looking to the first model, which predicts the vote for independence, we find powerful support for the economic hardship hypothesis. For every one percent increase in unemployment there is a 2.98 percent increase in the independence vote. Notice that percent unemployed has the largest magnitudinal relationship with the dependent variable in both models. A scatterplot of the “Yes” vote and percent unemployed shows the strength of the linear relationship between the two variables (see Figure 3). 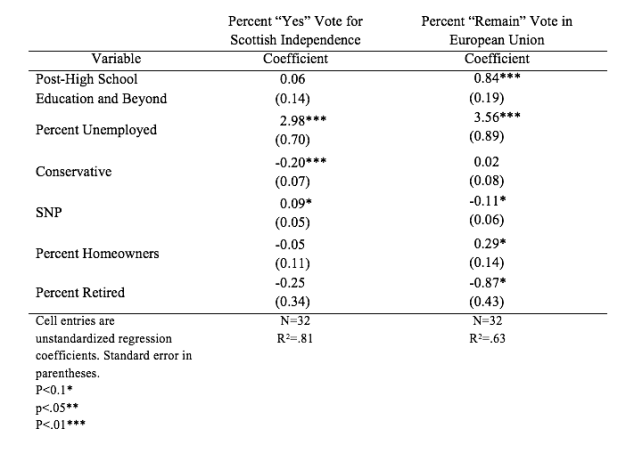 Over 50 percent of the electorate voted for independence in only 4 of the 32 councils; those 4 councils were also home to the highest unemployment rates in all Scotland. Nothing was more strongly correlated with the vote for independence than percent unemployed (Pearson’s r = .80). We do not find any support for the affluence hypotheses.

Education is in the expected direction while home ownership is not, but both variables are statistically insignificant with small t-scores (dividing the unstandardized regression coefficient by the standard error) of 0.40 for education and -0.43 for home ownership. For the status quo hypothesis, the percentage of retired persons is in the expected direction (a negative predictor of independence) but it is insignificant when controlling for other socioeconomic and political factors. As expected, we find powerful support for the party hypotheses. The percentage of seats held by the SNP is a significant positive predictor of the independence vote, while the percentage of seats held by the Conservative Party is a strong negative predictor of the “Yes” vote. For every percentage increase in seats held by the Conservative party and the SNP, the vote for independence decreased by .20 percent and increased by .09 percent respectively.